KidsPeace was awarded $5,000 for its Enhanced Clinical Trauma and Life Skills Program for female adolescent victims of trafficking and trauma. The program addresses the mental health needs of victims of commercial sex exploitation and provides both trauma-informed care and the development of life skills.

Crime Victims Council of the Lehigh Valley was awarded $12,500 for the 2018 Lehigh Valley Human Trafficking Conference:  Hiding in Plain Sight, which would be the first conference that brings together multiple disciplines from across the entire Lehigh Valley to address, identify and prevent human trafficking crimes.

Valley Against Sex Trafficking was awarded $12,500 for its VAST Survivor Community Center, a survivor-driven idea with the purpose to both house VAST headquarters and provide community-based, peer-led support to survivors of human trafficking.

Truth for Women, Inc. was awarded $20,000 for its Truth Home Program, which offers a safe place family setting for women, in an intensive therapeutic environment. The program deals with the serious issues survivors of sex trafficking face in a holistic way, focusing on the entire person—body, soul, and spirit. The home offers the opportunity for an individualized recovery plan through mentoring, counseling, coaching, life skills, education, family therapy, and spiritual encouragement.

Gifts in the form of a check can be made payable to the Spark Grants - Human Trafficking and mailed to The Lehigh Valley Community Foundation, 840 West Hamilton Street, Suite 310, Allentown, PA 18101. Gifts can also be made via credit card by clicking the PayPal 'Donate' button below. A PayPal account is not required to make an online gift to the Fund. Gifts to the fund will be used to support the Community Foundation's funding of organizations in Northampton and Lehigh Counties who provide mental and behavioral health services and education.

GET INFORMED. Learn more about human trafficking programs by viewing the four grant program videos. These organizations are tackling this important issue in the Lehigh Valley in a creative and collaborative way...

The Lehigh Valley Community Foundation (LVCF) announced the recipients of $50,000 in Spark Grants for human trafficking programs at the Foundation’s program, “Hidden Crisis: Human Trafficking in our Community,” on October 11, 2017, at the Third Street Alliance in Easton, Pa. 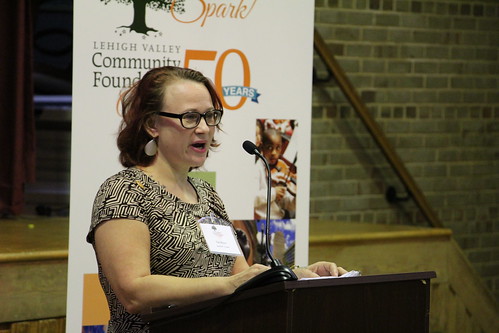 Human trafficking is happening across the United State, and in Pennsylvania including the Lehigh Valley. Traffickers use force, fraud and coercion to manipulate victims into engaging in commercial sex acts, or labor or services, in exchange for something of monetary value.

One of the fastest growing criminal enterprises in the world, the UN Office on Drugs and Crime estimated that the industry generates more than $32 billion per year. According to Polaris Project, the average entry of children into sex trafficking is age 12-15 and runaway youth are high risk for exploitation by traffickers.